Skip to main contentSkip to navigationSkip to search
May 22, 2017, 16:06
&nbspNon-regulatory

Successful inauguration of the Jouttikallio wind farm in Finland

TypeError: Cannot read properties of undefined (reading 'length')
The six wind turbines of the Jouttikallio wind farm were inaugurated on Thursday, 19 May, at Lappo in Finland. A good time was had by the around 300 visitors. OX2, the constructor of the wind farm, organised live music, speeches, food and competitions.

The acting municipal executive of Lappo, Ahti Latvala and the Responsible Company Director at Allianz, John Matthew, representing the owner, cut the ribbon and declared the wind farm open.

“Lappo has a long-term investment in environmentally sound energy solutions and this wind farm is a natural continuation of the development,” said Lappo’s acting city executive, Ahti Latvala.

The six wind turbines of the Jouttikallio wind farm have a total height of 210 metres, making them among the highest ever built in Finland.

“Technology is evolving very quickly in the wind power business. When wind power became commercialised in the early eighties, a normal-sizes wind turbines produced electricity for around 30 households per year. One turbine in this farm will generate electricity for over 2,000 households per year. The entire park, with its six turbines, generates almost half of what is used in Lappo”, explains OX2’s Country Manager Teemu Loikkanen.

Wind farm fact sheet
Jouttikallio wind farm is located in Kiviluomankangas, south-east of Lappo town centre, and consists of six wind turbines from Vestas. Its rated production is 63 million kWh of renewable electricity every year. This corresponds to the annual consumption of electricity for approximately 12,600 households and a reduction of carbon dioxide emissions of up to 50,000 tonnes per year. The wind farm is owned by the international insurance company, Allianz. The wind power company OX2 has built the facility and is responsible for its technical and commercial management. 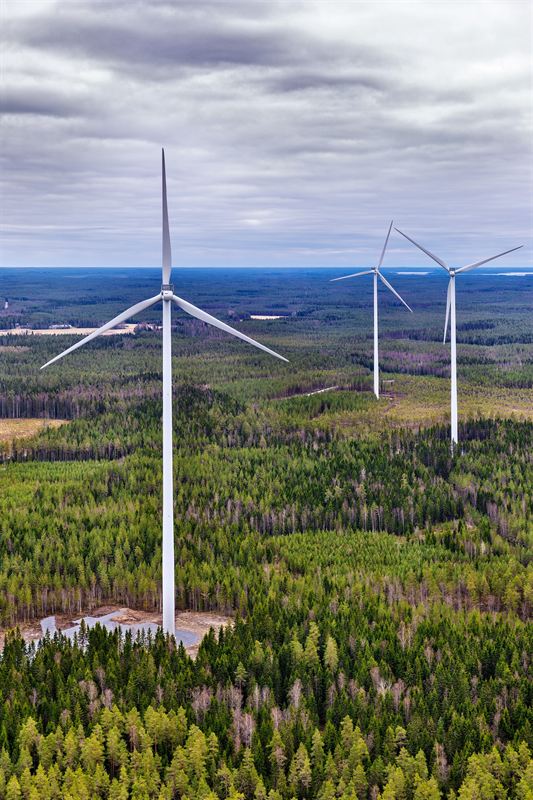 About OX2
OX2 is a renewable energy company with operations in wind power, solar power, bioenergy and geothermal energy. By offering sustainable investments, system solutions and products to financial operators, businesses and consumers, OX2 is a driving force in the conversion towards a renewable energy sector and a fossil fuel-free vehicle fleet. OX2 has realized a significant part of the large-scale onshore wind power projects in the Nordic region and produces biogas and green district heating in one of Sweden's largest biogas plants. For more information, please visit www.ox2.com

These cookies are essential for the site to work and provide you with a better user experience.